To understand why the Sma test is not enough, described above, we observe in the Photo 1 the different degradation steps that any organic matrix undergoes by the various groups of microorganisms that make up the anaerobic inoculum. Each bacterial group contributes to reducing the macromolecules that make up a given biomass, producing gradually simpler molecules until they transform into the acetic acid they need Archaea to live. Such a biological process (breathing) releases methane, carbon dioxide and water. 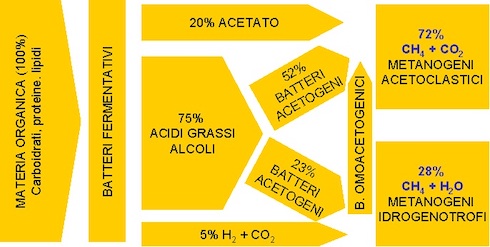 Like any ecosystem, also the digestate from a biogas plant it evolves to adapt to the substrate with which the digester is fed. In Italy, beyond the 90% of biogas plants are regularly fed with livestock manure in varying proportions. It would therefore seem that the selection of the “race” of bacteria to start with – or restart– a given plant is a process based only on common sense: if the plant will come fed with vegetable substances, the inoculum will be taken from a plant operating with the same type of substrate, or we will stock up on bovine manure, ovine, goat, or equine, as herbivores naturally have an intestinal bacterial flora suitable for digesting cellulosic substances.

In plants fed with animal by-products it is convenient to use an inoculum taken from a system fed with pig or poultry manure, as monogastric animals digest proteins and fats better.
In reality, this is not quite the case: sometimes there are no biogas plants operating permanently in the vicinity of the plant to be started up, in other cases the plants are there, but they are fed with biomass of a different type from that which is expected to be used in your plant. This does not mean that these inocula cannot be used, it is enough to verify if they have the right bacterial population to digest every component of the biomass or by-product of our interest.

Organic matter is made up of carbohydrates, proteins and lipids in varying proportions. Microorganisms that feed predominantly on one of such components are called respectively: hydrolytics, proteolytics and lipolytics. The rational way to selectively verify the biological activity of each of the groups of microorganisms that make up an anaerobic inoculum is to carry out a test of the methane potential (Bmp), using a pure reference substrate.

I reference substrates most common are:

A biogas plant fueled with a varied mix of by-products was unable to overcome the 50-60% of its rated power. The “biologist” on duty he had decreed – as usual in Europe, without making any proof – that the cause was the mix “too heterogeneous”, for which the plant was fed only with corn silage. Switching to silage-only feeding further reduced productivity.
The Photo 2, 3 e 4 will allow us to understand why.

It is observed that the test with cellulose it barely reaches the acceptable minimum and shows an irregular trend that differs from the classic sigmoid. The try with gelatina starts with normal values, but shows signs of inhibition from the tenth day on. The try Sma unequivocally indicates that the inoculum has too low a methanogenic activity. Feeding with a varied mix of complex substances allowed for low productivity, but constant, because the hydrolytic bacteria produced acetic acid at approximately the same rate with which the methanogenic flora converted the latter into methane. Switching to a diet of corn silage only led to the inhibition of the process, precisely because this substrate is easily hydrolyzable. The hydrolytic bacteria therefore produced acetic acid at a higher rate than the Archaea acetoclastics were able to methanize. This led to the accumulation of acetic acid, the abrupt lowering of pH, and finally the block of the biological process.

The SMA test is very useful, but alone it is not always sufficient to determine the quality of the digestate. A screening of the specific biological activities of each of the groups of microorganisms that make up the digestate of a biogas plant serves to give a clear idea of ​​the robustness of the process. These are relatively easy tests to do, requiring low cost and readily available ingredients such as: cellulose, gelatin and vinegar. A low-cost kit like the one shown in the opening photo of the article is sufficient to make such tests in a short time and with good accuracy.